This Old House #8 ~ The Allen House

Once again I was searching through my family trees and I noticed that there were quite a few photos of the homes that my ancestors had lived in. Some of them were built way back in the early 1600s. They varied in size, style, and construction material. They are all as equally unique as each of my ancestors!

The Allen house was built of heavy hewn logs and was both a fort and a public house. The roof of the building was steep, and shingled with hand-riven shingles. The walls between the rooms were of clay mixed with chopped straw. The walls were whitened with a wash made of powdered clam-shells. The first floor consisted of puncheon floors which were pieces of broad, heavy, roughly dressed timber with one face finished flat.. The well-smoothed timbers were sanded in careful designs with cleanly beach sand.

He was active in the defense of Deerfield in King Williams War and Queen Anne’s War. He was in military service in 1709. On April 17, 1707, he proceeded, along with John Sheldon and others to Canada, by order if Governor Dudley, to recover the English captives there. They returned on September 18th with seven redeemed captives, after suffering great dangers and fatigues. Edward died on February 10, 1740, in Deerfield, Massachusetts.

I am a professional genealogist, writer, photographer, wife, mother, and grandma. I have written two books “Your Family History: Doing It Right the First Time” and “Planning Your Genealogy Research Trip”, both available on Amazon. You can also connect with me on Facebook and Twitter @VHughesAuthor.

For many years I have been collecting photos of and information about the various signs that have been placed in honor of some of my ancestors. These signs are a glimpse into some event and/or place where they lived. Some of the signs are small like a placard with a few poignant words, some are large, and they go into great detail, and then there are those that are somewhere in between. Each one gives added life to those ancestors. 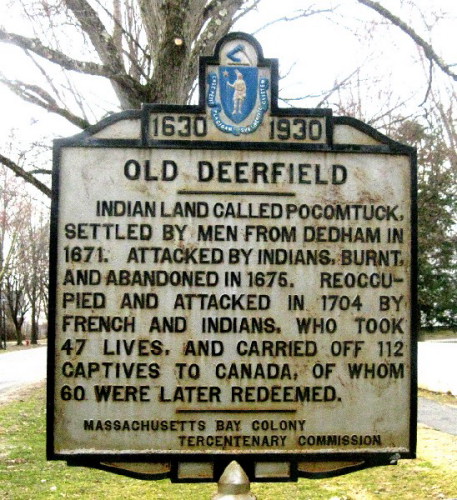