It was hard to decide which unexpected genealogy find I wanted to write about. After over 20 years of research, I have found too many to list. So, I decided to not travel way back in time but to write about a discovery closer to home. 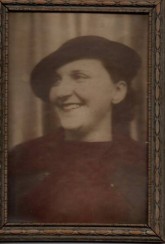 My mother had 5 siblings. three brothers and two sisters. Two of her siblings died before the age of two. I was fortunate to be able to meet the other three, however briefly it was. My mothers’ sister, Mary Elizabeth Smith was born on November 4, 1905, in Clay, Lafayette County, Missouri. She was 14 years older than my mother so she had left home and Missouri when mother was 5 years old. Mary moved to Dallas Texas and got a job at Macy’s Department Store. She met and married Otto Glen Claxton who was 7 years older than her and they had one daughter 1937. This is all the information I had on her.

I remember Aunt Mary would send my sister and me very expensive gifts for birthdays and Christmas. One year we each got leather handbags and another year we got Hummel figurines. I only remember meeting her once when she and Uncle Otto came to Arizona to visit. She was a strikingly beautiful woman at least in her older years. It was in the Spring when they came and she wore mink stoles everywhere she went. Spring temperatures in Arizona run 78-90 degrees so I thought this was odd. Uncle Otto was bald and smoked cigars. It is funny the things kids seem to remember.

A few years ago I was talking with my last remaining first cousin on my mothers’ side and he was filling me in on Aunt Mary’s life. Knowing that verifying information is critical to genealogy I began researching the data. Here is what I found.

* In 1935 Mary was a champion skeet shooter. She won numerous awards over the years for her marksmanship.

* Mary and Otto had an affair in 1936 which resulted in my cousin. In those days out of wedlock births were scandalous!

*I found one newspaper article featuring her as the manager of a new dress shop in Dallas. 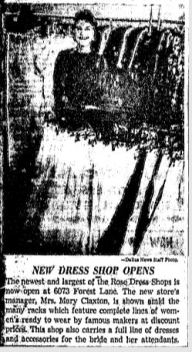 * And last but certainly not least Mary and Otto had been married 7 times and divorced 8 times!

I guess you can say Mary was a woman way ahead of her time as today this would or could be considered normal. She died on December 1, 1980, in Ventura, California, at the age of 75.