My family moved from the deserts of Arizona to Oak Grove Missouri in April of 1967. It was a small town east of Kansas City and I had relatives who lived there. Because we moved before I finished 6th grade I had to finish my grade here. The school was one long building that held all of the 1st through 12th grades. I had played clarinet since 3rd grade and I wanted desperately to continue here. They didn’t have a band for elementary school so I had to play in the High School Band. That was quite an adventure. Especially the end of the year concert in the park where they placed me in the middle of the front row and people were pointing at me and taking pictures because I looked like a midget compared to the rest of the band members! Things were definitely different here.

After school was out my parents bought a house in Independence, Missouri. I was so

excited to be starting Junior High because, after all, I was 12 years old now. Things were sure to be better in the bigger city. Imagine how crushed I was to discover that 7th grade was still held in the Elementary schools. Junior High was 8th and 9th grade. My old school was barely in the city limits and it was surrounded by desert. It was a single-story building that had 3 separate portable buildings for the 6th graders. Here in Independence, the school was huge! It was 3 stories high and the “playground” was almost all cement. There was a large gym on the bottom floor and that is where we got our exercise.

One thing I thought was odd was once a week a teacher would come to the class to teach Spanish. First, it was odd because there were no Hispanic children in the entire school of about 800+ children! I was raised in a neighborhood and attended a school that was 75% Hispanic. We never took Spanish classes there. Second, with the deep mid-west accent of the teacher, only a few words were pronounced correctly. There were many other things that I found different and one was they offered home economics for us. I had fun learning how to cook as my mother never taught me anything in the kitchen except to clean it.

During the 2nd half of the school year, I got to take a sewing class. I was so excited. Growing up my mother made about 60% of our clothes. I would watch her cut out the patterns, then cut the cloth and then sit at her machine and in the end there was a garment of some kind. My sister had no interest in learning to sew but I did. I asked several times if she would teach me but the answer was always no. My dad took me to the fabric store and we purchased some rose-colored material that would eventually be a pair of shorts. We picked out a corresponding zipper, buttons, thread, and the pattern and I couldn’t wait for class.

My best friend Kathy and I were in the same class so we teamed up to share the sewing machine. On the first day of class, we were told that all shorts had to be knee-length. Anything shorter would get you an automatic F. We were not happy because the new “style” was shorter shorts. It took about 4 weeks to finish the project. Not bad considering we only went to class 2 times per week and we had to share everything. When everyone was done we all marched downstairs to the girls’ bathroom and put on our shorts. They fit well even if they were longer than we wanted. After the teacher measured the length of each one we had to change back into our regular clothes.

In most schools in 1968, girls could not wear pants or shorts to school. Only dresses or 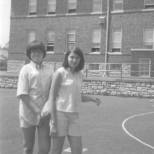 skirts were allowed. We were told that for the last day of school we could wear our shorts as a reward for our hard work. Kathy and I went to her house and we “adjusted” the length of the legs. When we showed up to school everyone was staring at us. It was only a half-day but we still got called to the principals’ office. We were threatened with not being able to pass to 8th grade and having our parents come to pick us up but in the end, she just sent us back to class.

Several of us brought cameras and we ran around taking photos of our friends and getting our class picture signed. We had cake and punch around noon and then the class was dismissed. It turned out to be a great day.

I am 3rd from the left in the front row

I never really learned to sew well enough to make complicated items. I sewed maternity tops for me and baby nightgowns for each of my 3 children. I really do wish I had maybe tried harder to learn the skill. Then again maybe I wasn’t meant to be able to sew.

2 responses to “Monday’s for Me ~ Independence, Missouri ~ Bristol Elementary School 1968”