I am related to the Willard family in Missouri in two ways. First, my paternal Great Aunt, Ida May Hayes married John Henry Willard in 1905. Secondly, my paternal Aunt, Ellie Belle Hughes married Mitchell Lee Willard in 1927. John Henry and Mitchell Lee were half brothers. No, this is not the freaky part of this story even though it does make my Aunt a niece and a sister-in-law to Ida May! Sit back, get comfortable with your favorite beverage and follow along with this freaky tale.

John Daniel Willard was the father of these two half-brothers. On January 5, 1869,

he married Evanda Decker and over the next 14 years, they had 4 sons. After the birth of her first son, Evanda began to exhibit some odd behavior. She constantly talked to herself, acting very erratic and she would wander off leaving her small children alone in the house. Her condition worsened after her fourth son was born, so John Daniel felt he had no option but to have her committed. In 1883 he had her admitted to the State Mental Hospital in Fulton, Missouri. They never got divorced.

Miss Rosa Noble in Adair, MO. He was 36 years old and she was under the age of 18. Her father had to give permission for them to marry.  Not much is known about this marriage. What we do know is that Rosa moved into John’s house and took care of his 4 sons. All of a sudden, there are no more records of Rosa. No divorce papers, no other marriage licenses, and no death certificate. One day she is there and the next day she is gone!

Enter Miss Sarah Jane Pinkerton. On December 26, 1886, John and Sarah get married and they moved the family to the mining community of Willard, MO which is just north of Springfield. A little less than 9 months later they welcomed their first child, a little girl. They went on to have a total of 6 children, 2 girls, and 4 boys. On January 25, 1914, at the age of 66, John died of liver cancer.

In the 27 years since he had Evanda committed, he never went to visit her. He never divorced any of his wives and he never revealed what happened to Rosa. This was indeed a very mysterious man. It is unknown if Rosa and Sarah knew that John had never divorced Evanda, therefore they were never really married to the man. Now that’s Freaky!!! 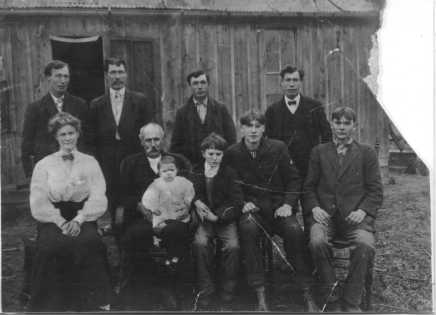