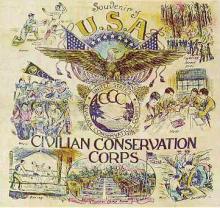 In the early 1930’s America was in the middle of the greatest financial Depression it had ever experienced. Over 4,340,000 people were out of work with over 8,000,000 living in the streets of our cities and towns. Men took any kind of work that was available to put food on the table for their families and there didn’t seem to be any relief in sight.

In the beginning of 1933, when President Franklin D. Roosevelt was sworn into office one of the first things he did was to approve several measures as part of his “New Deal”. In his first 100 days of office he instituted several programs that would put the American people back to work. One of those programs was called the “Civilian Conservation Corps” (CCC), a public works project intended to promote environmental conservation and to build good citizens through vigorous, disciplined outdoor labor. From 1933 to 1942 unmarried men from relief families, ages 18–25 participated in the CCC, which provided them with shelter, medical care, clothing, and food, together with a small wage of $30 a month ($25 of which had to be sent home to their families). Over 3 million young men took part in this over the 9 year period.

I am proud to say that my Dad, Douglas Hughes, was one of those men. He joined the CCC in 1935 at the age of 20 and was sent to the camp in Lake Tahoe, California. He was born and raised in rural Missouri so this was a grand adventure for him. Growing up on a farm he had developed various skills but they were limited to agriculture and horse breeding.

At the Camp he learned how to do different types of construction work. He helped to build roads, clear trees and to build Ramada’s and out-buildings that are still used today in Lake Tahoe.

Because of his participation in the CCC program he became a sought after carpenter. He could build anything with little or no instructions. 11 months after I was born, my parents moved my sister and me to Tucson Az. Within a year they bought a new home and my Dad took pride in building a carport, cement patio and block flower boxes. In 1957 he built a large red brick Bar B Que in the corner of our yard. Believe me we used it a lot over the next 10 years!

We sold the house and moved out of State in 1967. Last October my husband and I took a drive to Tucson and we drove past my old childhood home. The homes in the neighborhood were in bad shape and my home did not even resemble the well cared for home I remembered. As we drove around the corner I spotted the old Bar B Que still standing! I got so excited. It was in great condition, especially for being 56 years old!

This is not only a testament to my Dad’s “brick and mortar” skills but also to the Civilian Conservation Corps. Because of them he learned the expertise needed to work in the Construction/Carpentry field for over 40 years.

I am so grateful to be the daughter of a CCC man!

I am a professional genealogist, writer, photographer, crafter, reader, wife, mother, and grandma. I have two books available on Amazon.com: Your Family History: Doing It Right the First Time and Planning Your Genealogy Research Trip. You can also connect with me via Facebook or Twitter.

4 thoughts on “The Civilian Conservation Corps”