Elvira Register Hayes- The Woman Who Never Outgrew Her Mischievousness 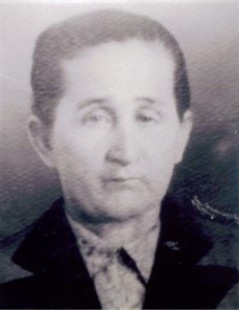 Elvira Register was born in Leavenworth Kansas on March 4 1861. Her parents, Mathew and Elisia (White) quickly moved their growing family back to St. Joseph Missouri where Mathew was originally from. Elvira grew up on a large farm and had to learn not only how to take care of the home but also to work the fields and take care of the animals. Her parents were given 2 slaves as a wedding present who were brother and sister. The woman’s name was Tid and she had the responsibility of taking care of the children. She was especially fond of Elvira. After the Civil War, Mathew bought a home for Tid and her brother London and Elvira and Tid remained friends the rest of their lives.

Growing up one of the chores that she had to do was chopping the firewood. At 10 years old she was pretty good at it. One day while out splitting the wood she got the axe caught in the log. She tried for a long time to get it out but couldn’t. Her brother Frank, who was 5 years old at the time, came by and decided to help. As Frank helped her release the axe it slipped and it accidentally cut off Frank’s finger. If this wasn’t bad enough, Elvira watched in horror as one of the family hounds ate his finger.

In 1873 Mathew moved his family from St. Joseph Missouri to Perry Oklahoma. It was a long, hard trip, riding in covered wagons pulled by oxen. There were 9 children by this time and they all had to help out with the daily chores. Elvira was 12 years old and the girls in the family had the responsibility of herding the milk cows as they walked behind the wagons each day. Her father was a teetotaler but he had a jug of whiskey that he kept for medicinal reasons. One hot day the girls being very thirsty decided to have a drink of the whiskey. They knew where it was hidden in the wagon and Elvira went and got it. As they herded the cows they all took a sip from the jug. Elvira decided she like the taste so she kept walking and sipping from the jug. By the end of the day she was drunk. She tried to walk a wagon tongue (A long, heavy piece of wood used to guide the wagon) but was not successful. She put on quite a show and the other wagon train members were shocked. They quickly called on her parents and they were also in shock. They did not punish Elvira because they figured she learned her lesson when she was sick the whole night.

Elvira thought that her younger sister Rachel, who was sickly, had everything easier than herself. One evening she pretended to be sick so she would not have to help with dinner. The next morning her father killed a wild turkey for breakfast. The odor of the cooking bird reached Elvira and she suddenly became well and wanted to eat. Her mother, wanting to teach her a lesson made her stay in bed for the rest of the day eating only broth. Since her bed was in the back of one of the wagons the ride was not at all pleasant.

After 2 years in Oklahoma the Register family moved back to St, Joseph. Here Elvira met and married Hamilton Hayes. She was 18 years old and he was 22. Hamilton was a very handsome and successful farmer. They had 12 children, the first 2 dying soon after their birth of scarlet fever.  Elvira was an exceptional seamstress and made clothes for not only her own family but she was also hired to make clothing for people all over the county. She had a generous heart and she would make clothes for the less fortunate and leave them on their doorsteps at night. It is said that she never lost her mischievous nature and found great pleasure in playing jokes on others.

Hamilton died in 1906 leaving the care of the farm to Elvira. She continued to run the farm until about 1930. She then sold the farm and moved to Lexington Missouri to be closer to her children. She was a strong, willful, amazing woman who loved her family with all her heart. She died on November 14 1936 at the age of 75 years old. She is buried beside her beloved Hamilton in the Dover Cemetery in Dover, Missouri. Her first surviving child, Virginia Belle Hayes (Hughes) was my paternal Grandmother.