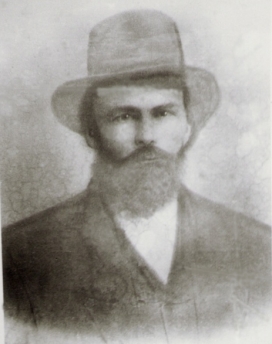 Mathew Arvin Register was born in February of 1832 in North Carolina, the oldest child of Francis and Sarah (Johnson) Register.  Growing up everyone called him “Mathy” and the name stuck with him throughout his life. Sometime before 1850 the Register’s packed up their belongings, loaded them in covered wagons pulled by oxen and headed for Missouri. It took several months of traveling but they finally reached the St. Joseph area. As a side note the current city of St. Joseph was built on land that was owned by the Register family.

In 1850, at the age of 18, Mathew met and married Elisia Jane White. For a wedding present, Francis gave them 2 slaves named Tid and London. After the Civil War, Mathew bought a house in St. Joseph for them.  Mathew was a singer and he established himself as a well known vocal teacher in the area. Singing and teaching was a passion for him. He was known as a kind and compassionate man.

Over the next 11 years, Mathew and Elisia had 5 children. Then the Civil War broke out. Missouri was one of the most divided States concerning the Slavery issue. Many families were torn apart by this. Although the entire Register Family owned several slaves they sided with the Union.  Mathew and 2 of his brothers, Owen and Sim joined the Union Army. Owen was soon captured by the Confederates. The rebels sometimes made their prisoners fight with them. Because of this Mathew and Sim were always afraid of accidentally shooting Owen during one of the skirmishes. Thankfully all three of the brothers survived the war, however while a prisoner of the Confederates, Owens’ fingers froze and all of his fingers and thumbs were amputated at the first joint.

In 1873, Mathew moved his family from St. Joseph to Perry, Oklahoma which was located in the Cherokee Nation.  He had obtained a government contract to deliver supplies and horses to the Cherokee Strip. Their family had now grown by 4 more children so it was a large group. Mathew started and ran a wagon freight line between St. Joseph and Perry for several years. He also raised broodmares on his farm in Missouri (which he still owned) and delivered them to the Army Fort in Oklahoma. The family only lived in Oklahoma for 2 years before returning to St. Joseph. Mathew continued with his freight business running it from his farm.

All together Mathew and Elisia had 12 children. 3 died at a young age.  In about 1880 they moved near Dover, Lafayette County, Missouri. There he owned an orchard and grew Golden Seal apples. He would comb the hills around the town digging up wild Ginseng Root and he sold both apples and the Ginseng to the public. In 1902 his beloved wife died.